This montane form of Blue-winged Leafbird was previously classified under Chloropsis cochinchinsis flavocincta . This form differs from the lowland forms in that the female has black throat, just like the male. This is abundant montane resident along the spinal chain from G. Kinabalu to Usun Apau plateau and G. Dulit, G. Tudal in Brunei and to Kayan Mentarang in East Kalimantan. 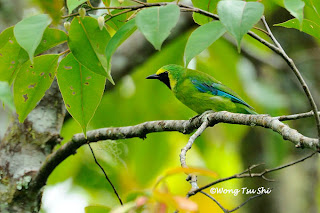 Taxonomic note: Seperation of C. (c) kinabaluensis from C. cochinchinensis follows Mees (1986) and Wells et al (2003). The two species would appear to overlap in altitude on Usun Apau Plateau, Sarawak. Use of Kinabaluensis in place of flavocincta follows Sharpe (1889), and is fully explained in Wells et al (2003).