Asian Fairy-bluebird Irena puella is a striking bird, when seen from its side the male is unmistakable in field identification. It is widespread in Borneo. This is a fruit eating bird that usually forages in pairs in the canopy of large trees, so when seen from  below one usually sees an entirely black and thick-set bird, considerably larger than the bulbuls.
The male has only two colors in its plumage, deep velvety black and shiny bright pale blue. The blue extends from the top of the head to the shoulders and  through the back and down  to the under-tail converts 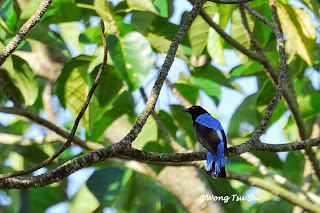 Adult male
The female is almost entirely dull blue, however the blue is entirely different blue from the male, the blue is dull and without gloss, in a different tone, more cobalt and dusky than lively bright. 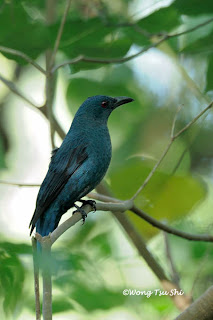 Adult female
This is an immature bird, the black patches in the breast indicate that it is a male, as female does not have any black in its plumage. 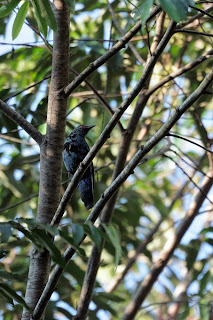 Immature male
Its sex is further confirmed from its side profile, where the still developing shiny bright blue can be seen on its upper-parts. 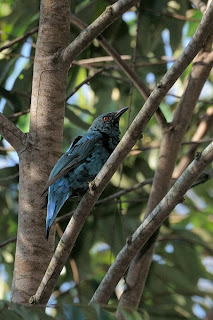