Black-winged Stilt Himantopus himantopus is a common migrant from the north to northwest coast of Borneo, especially abundant in fresh and brackish water wetlands. Hundreds of them can be seen in groups in paddy fields in Tampasuk Plain and Penampang, Sabah during the northern winter months.

Black-necked Stilt (White-headed Stilt) Himantopus leucocephalus, a similar looking bird but for its black nuchal mane, is a scarce migrant from the south. Seen on rare occasions among groups of Black-winged Stilt.

However, as some Black-winged Stilts can exhibit plumage patterns showing black nuchal mane similar to Black-necked Stilt, as highlighted by Sifu Dave Bakewell in his article published in BirdingASIA 17, page 14-17, great care must be taken to lay claim on sighting of Black-necked Stilt.

Identification by call can also be made if both species are together and their calls can be heard, Black-winged Stilt has a comparatively higher pitch yelping call.

Size
In Susan Myers' fieldguide, she lists both species as between 35-40 cm, which essentially says they are of similar size.

As the fieldguides have differing sizes, I'll accept that they sizes vary both ways.

Appearance
These two birds were photographed on 26th August 2012 in Tinagat, Tawau. One is a Black-winged in breeding plumage while the other has all the features of a Black-necked.

We cannot use bill shape for identification as the bill can be varied from straight and upcurve slightly as evidenced by comparing photos of different Black-winged Stilts.

We can also see that the Black-necked Stilt is displaying a well developed black nuchal mane, has perfect white on its crown and ear-coverts, without any visible trace of grey or black. Any existance of traces of grey or black on the crown and ear-coverts would have suggested that this is a Black-winged Stilt showing plumage of a Black-necked Stilt, as reported by Sifu Dave Bakewell in his BirdingASIA article. 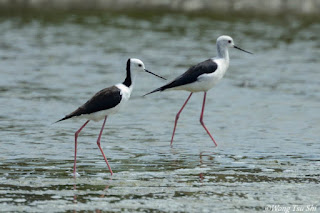 Smaller Black-necked Stilt on the left
﻿ 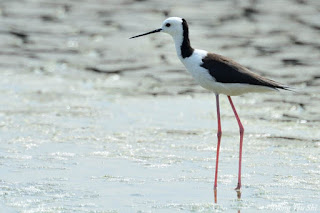 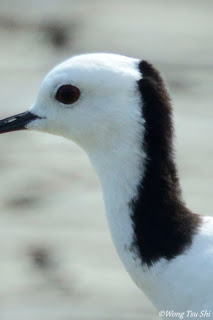 I therefore believe this is a Black-necked Stilt.

The Black-winged is in breeding plumage, and if the other bird is indeed a Black-necked than they might be in courtship, as these two species are believed to hybridise over their overlapping range.
Here is a short video of the pair.
﻿
Happy birding.
Photodocument of Wild Birds of Borneo.

The list shows the notable bird sightings in Sabah in the third quarter of 2012, feel free to email me if I miss out anything. 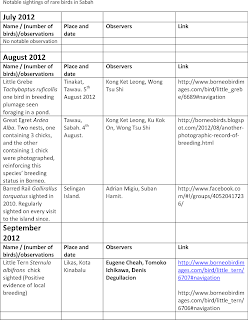 A Word file with clickable link to the relevant images is at Borneo Bird Images Document list.

Standard References for my blog.
No comments: