The Story of Barn Owl in Borneo

In the beginning, there was no Barn Owl in Borneo until oil palm came along.

"Rats have caused serious damage to oil palm in certain parts of Sabah. Barn owls were first introduced from Peninsula Malaysia in 1990 to 1992 by Sawit Kinabalu Berhad (formerly Sabah Land Development Board). It had since established well in Klias Estate/Settlement Scheme, Beaufort. Rat attacks in terms of palms with fresh damages of FFB had dropped considerably after the introduction of barn owls to quite an acceptable level without the need of any baiting. Occupancy rates of nest boxes in 1999 were in the region of around 50 to 60 per cent, indicating the owls introduced are still there and are multiplying. The role of barn owls in rat control can be important in future as rats are expected to adapt and establish itself in oil palm plantations in tandem with the rapid expansion of this crop in Sabah. "
{Abstract from The introduction of Barn Owl (Tyto alba) to Sabah for rat control in oil palm plantations [2000] by Hoong, H.K. (Sawit Kinabalu Berhad, Jalan Tuaran, 88300, K. K. Sabah, Malaysia.}

"In 1990 six pairs were carried from Peninsular Malaysia to Sabah on behalf of the Sabah Land Development Corporation [Board] (SLDC). They were released at Beaufort on 31 Jan 1990. First breeding was noticed in Jul 1991, and by mid 1996 it was estimated that there were about 50 locally bred birds. Altogether 24 birds were brought in by SLDC. Three pairs were brought in to Sabah by Pacific Cocoa Plantations and Pamol, but these failed to occupy the nest boxes provided. Three pairs were taken to Pekaka Estate near Miri, Sarawak, which apparently did not occupy boxes provided and may have been shot. Three pairs were taken to Batu Niah Estate, Sarawak, but there was no follow-up information on these."
{Quote from The Birds of Borneo, Fourth Edition, B. E. Smythis.}

The second known translocation program was carried out in 2003 which involved 5 pairs of Tyto alba introduced  to  the  Sarawak  rice  field  project  at  Gedung,  Samarahan  area  from  Peninsular Malaysia  (pers.  Comm.,  Hafidzi). Unfortunately  there  was  no  follow-up  on  the  status  of  the translocated batch. 16 individuals (Tyto alba javanica) were again introduced to FGV Sahabat 06, Lahad Datu, Sabah.
{Quote from Propagation of Barn owls in an Oil Palm Plantation of Sabah: FGV’s Experience, by Zainal Abidin, Cik Mohd Rizuan; M.N., Hafidzi; Hamid, Noor Hisham; Salim, Hasber. }, a paper presented in 2016, no date of Lahad Datu introduction was mentioned, but should be before presentation of that paper.

From the above introductions, it would be logical to deduce that even if they were successful in their new habitats, their number would still be relatively small, and  hardly seen outside areas that they were first released.

On 3rd February 2018, at around 10 am, I received an image through WhatsApp from a birding friend of mine, the image showed an unmistakable Barn Owl. On further inquiry, he replied that the owl was big and the image was taken by one of his workers from inside his company's warehouse using smartphone. The location was near Jalan Tanjung Batu, Tawau, near the seaside and not far from Tawau town..

After confirming with him the location, we both mobilized ourselves and rushed home to take our camera equipment. The Owl was still inside the warehouse when we arrived, it perched on one of those wooden beams, struts, rafters or whatever it is called, oblivious of the forklift that was moving about inside the warehouse. It did flew and perch further away if we got too near to it. By the way, those beams were at least 20 feet from the ground.

The warehouse is at least 10,000 sq ft., constructed with solid brick wall from ground up, have one main gate and no window, ventilation opening covered with wire mesh are located just below the roof, to keep out rats and other pests. As it was a Saturday, the warehouse would be locked later for the weekend, we were a bit worried that it might starve if it could not find its way out. 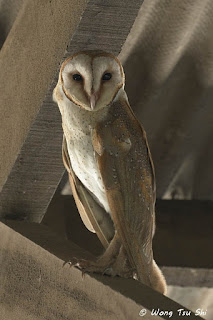 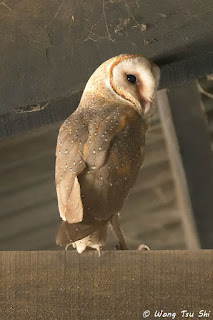 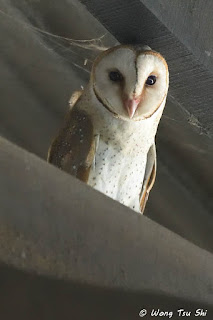 On Monday morning, workers returned but could not locate it anymore, it must have exited from the same breach that had admitted it earlier.

From the images (I believe these are the first images of Barn Owl from Borneo, the first one was taken by the warehouse worker, of course, lol.), there is no apparent sign of captivity. So, is this only an odd strayed bird or the Barn Owls are spreading out from Oil Palm Plantations looking for greener pastures? Let's wait and see.

{Edited on 21 July 2018: On 16 July 2018, Mr Lim was alerted of an Owl perched on one of the ceiling joists of the same warehouse by his worker. It later turned out to be another Barn Owl, which has a darker colorization on face and upper breast, it,  too rested there during the day and no where to be found the next morning.

The image of this individual is here.

It looks like we might have more than one individual in that area, we shall see in time to come. }

I'm really interested to set up lots of owl nest boxes starting in around Tawau, to catch rats in towns and plantations.
I heard there's an owl aviary near Kunak, Jalan Tun Hussien Onn. Sawit told me Barn Owl project failed due to human hunting, but naturally population might have dwindled due to lack of follow-up efforts perhaps.
And what about do you have the specific location of the lone owl you photographed in Tanjung Batu?

You can reach me at otivaeey(AT)gmail.com. Let's meet up.