The Story of Little Stint in Borneo. 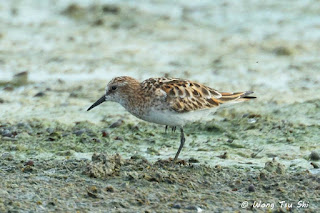 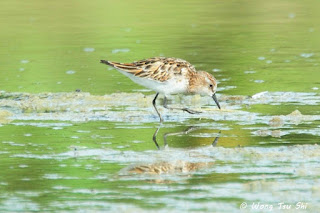 Little Stint Calidris minuta, a very rare vagrant to Borneo. Mann included in his checklist of Birds of Borneo with one well documented record from Mumiang on 6th October 1984 by David Beadle. Mumiang is the only record historically accepted by most.

Another record from Seria , Brunei in 1985 lacked substantiating documentation and was generally ignored.

Mann's checklist (2008) as well as the two Bornean Fieldguides by Phillipps (2014) and Myers (2016) were since published and there wasn't any new record on this little fella included.

Birders and photographers in Sabah have been trying hard to nail a positive record of this bird as everyone believes it must be under recorded,  as it looks very similar to Red-necked Stint Calidris ruficollis in winter plumage, which occurs in large number in winter months here. So it must be somewhere out there mingling with the hundreds of Red-necked Stints foraging happily in the distant sand bars.

Waders expert Dave Bakewell, who has a number of well-written and well-illustrated blog postings on the identification of Little Stint has been approached numerous times to help identifying odd looking stints photographed in Sabah. These images represent a faint hope that one  might show a Little Stint, but all this while they show unmistakable Red-neck Stints in various ages and moults to Dave's expert eyes.

In 2015 MNS- BCC Record Committee reviewed the status of Little Stint in Sabah and Sarawak when it was updating the Malaysian Checklist in view of the lack of records in the intervening years. In order to put the record official, the  only record from Mumiang was put up for the consideration of the Record Committee, The Committee Chair managed to get in contact with the original observer, Mr. David Beadle, who amazingly still have his note book on the observation.

The Record Committee later accepted that record, and that remained the only record until 9th September 2016 when Mr Stanley T Shao photographed an odd looking Stint from Tawau, Sabah, which was later identified by Mr. Dave Bakewell to be Little Stint. The image is here.

Another bird was photographed in Tawau on 2nd January 2017, image here.

No idea whether all the images are from the same bird that was first photographed in September 2016, though mid-July is early but not an unlikely date for waders arrival.

With this, our belief that Little Stint is definitely out there is confirmed.