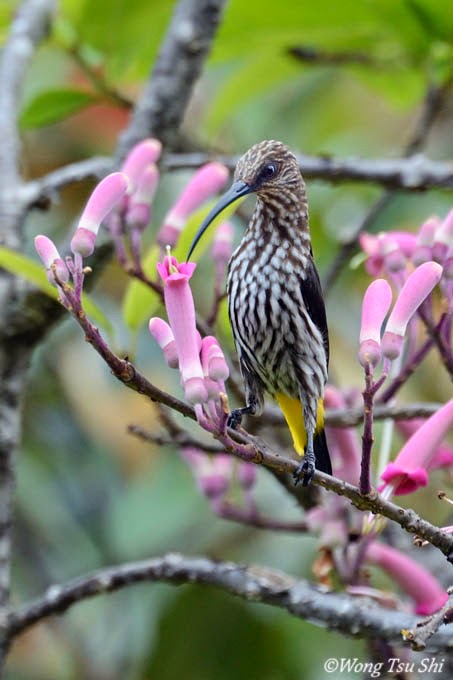 Bird photographers and visiting birders in Sabah were all excited since the beginning of December,  as happening somewhere in Sabah, the most elusive of the three Whitehead's, Whitehead's Spiderhunter Arachnothera juliae, could be guaranteed seen and photographed in good light from less than 15 meters away.

At Rafflesia Forest Reserve, along Tambunan Penampang highway, a small tree, less than 10 meters tall, was in bloom with pink flowers at its canopy, and Whitehead's Spiderhunter could be seen feeding on nectar among the flower clusters at regular intervals throughout the day. For each visit, it would  stay and feed on average for a few minutes, hopping merrily from twig to twig prodding its long bill and extending its hair like tongue into the longish bell-shaped flowers, oblivious both to the people watching and to the noisy heavy traffic passing underneath.

The maximum number of bird seen feeding at any one time was three, I was lucky to witness two feeding at the same time. Interestingly, Whitehead's Spiderhunter seemed to be the only bird species feeding there, the Sunbirds and Flowerpeckers busy feeding on the opposite side of the highway were not interested in this flower at all. No other bird was seen feeding on this tree during the intervals when the spiderhunter was away.

Whitehead's Spiderhunter is one of the most sought-after Whitehead's in Borneo, as one could have tried for years before being rewarded with a view of it far away on the canopy of a flowering tree. You can imagine the amount of hoo-ha it generates among the interested people as it can be assured of feeding daily at that tree, occasionally up to three birds at the same time.

Mr Kong Ket Leong and I drove from Tawau on 14th December (in the third week after first discovery of the feeding), as the pressure was mounting  after being told that the flowers might not last longer than another week, and only God knew when it would bloom again.

I do not know the name of the tree. I have also not heard nor read about this feeding before as anything of this nature involving a Whitehead's would be big news to people who are interested.

Does the tree flower yearly? I do not know, as I have not heard of this feeding frenzy last year nor the year before. Sabah has been quite active in the birding scene for at least the past six or seven years, so I opine that anything of this nature in this relatively short history of bird watching/photography would have been hotly circulated as it does now, thus I think this has not happened before. The tree just might flower irregularly and erratically, may be once in an unknown number of years or on certain unknown trigger.

On the other hand, as the flowering tree is less than 10 meters tall and its girth not bigger than a power line pole, it might very well be flowering for the first time and hence the lack of any previous observation.

If the tree is indeed flowering for the first time and if it blooms annually, we can have a yearly Whitehead's Spiderhunter Festival there for birders and photographers. We will only know about that next year, and at the meantime we do what good birders do, we wait.

(Note: this is the unedited version submitted for publication in December 2013 issue of Suara Enggang. The flower is subsequently identified to be Wightia borneensis.)

A splendid bird. Well worth the effort to get to the site !

Wow! It must be an exciting affair. Beautiful shot by the way.