There is a mysterious Short-tailed Babbler, (similar to the Short-tailed Babbler Malacocincla malaccensis poliogenys of Sabah, Brunei and eastern Borneo, and the Barito drainage in Southern Kalimantan, and M. m. saturatum of western Borneo) dwelling in the forests of Borneo, it was not seen nor photographed in the wild since 1898.

Its existence is without doubt due to a specimen taken from Gunung Mulu in Sarawak in 1898.

The following passage is copied from Smythies, The Birds of Borneo, 4th Edition.

"Another taxon, M. m. feriatum Chasen & Kloss 1931,was described from a single specimen collected by J. Waterstradt in March 1898, from an unrecorded altitude at G. Mulu. This may represent a distinct species (Deignan, in litt. to Smythies), with an entirely ochraceous underparts from the chin and throat to vent (except central abdomen) and chestnut crown contrasting with the mantle, the mantle lacking the greyish tinge obvious in Sabah examples of M. m. poliogenys. Wing 75, tarsus 30, bill from gape 23.5 mm. All other races have the throat white. This form could be montane, but no evidence of it was reported from the Royal Geographic Society expedition to G. Mulu National Park in 1977-78."

Apparently no one has seen or reported it since than.

Its only illustration can be found in both first and second edition of Phillipps' Field Guide To The Birds Of Borneo, in which the bird is depicted just like what is described in Smythies. For obvious reason, Quentin has named it Mulu Short-tailed Babbler, (For ease of narration, I will call it Mulu Short-tailed Babbler or Mulu Bird here), he also thinks it probably occurs in  montane forests, in contrast to Short-taild Babbler which occurs elsewhere in lowlands in the same National Park

I have on 14th September 2013, photographed a bird which looks remarkably similar to the Quentin's Mulu Bird in Tawau Hills Park, the image is shown here with other images of Short-tailed Babbler for comparison. 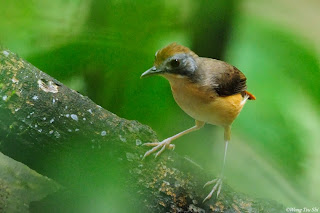 This is the Tawau Hills Park Bird. 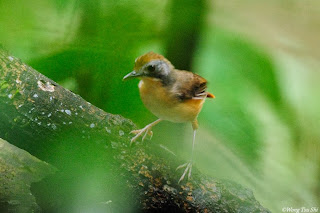 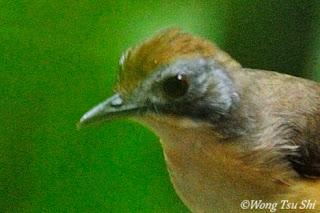 Close up of the head showing the lack of white throat 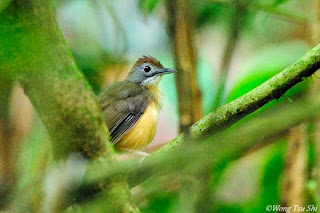 This is a Short-tailed Babbler of the poliogenys race about 100 meters away from the earlier bird, but taken one week later, for comparison. 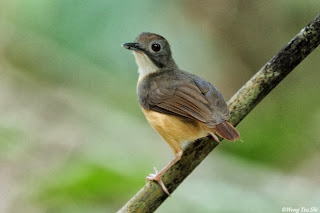 This is a Short-tailed Babbler photographed in RDC, Sepilok, Sandakan Sabah, also of the poliogenys race.

The Tawau Hills Park bird is photographed in lowland habitat similar to those inhabited by Short-tailed Babbler. This shows that these two birds are sharing same habitat, therefore, could this two birds are actually different taxon? Well, may be,  our different Bulbuls are sharing common habitats, feeding on the same fruits from the same trees in the same forest.

Could this be a bird in juvenile plumage? The bird in the image does not look like a juvenile bird as the light color gape line is no more visible, indicating that it is a mature bird. An image of juvenile Short-tailed Babbler taken nearby in Tawau Hills Park show whitish throat, however, there are some young individuals showing varying amount of ochraceous on the throat, but the white on the throat is usually prominent. 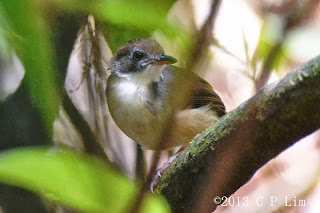 
The original Mulu bird is popularly perceived to be of montane origin, but no altitude data was recorded for that specimen. However, some birds in Borneo are known to occur in a wide altitude range, occuring both in montane and lowlands habitats. Velvet-fronted Nuthatch Sitta frontalis, Little Cuckoo Dove Macropygia ruficeps and Checker-throated Woodpecker Picus mentalis, to name a few, are all  found both in lowland and montane forests in Borneo. So the Mulu Bird could possibly be lowland, montane or both.

I have discussed this with Mr Quentin Phillipps who has shared his view with me and I take the liberty to share his thoughts on this bird here.

"Given the fact that it was found in the lowland forest where there are already many Short-tailed Babblers my guess is that it is an age related variant of the normal Short–Tailed Babbler eg immature first year bird or something similar  but there is a possibility that it could be a cryptic species. This can only be proven conclusively if you find several similar birds living in the same area and if the breeding song is distinctively different from that of Short-Tailed Babbler. Obviously it is well worth further research to find out what the situation is."

Hence, this entry in my blog is to alert birders and photographers out there in Borneo not to ignore the lowly Short-tailed Babbler they encounter in the field (my mistake of taking for granted this is another ordinary Short-tailed Babbler, otherwise I would have taken many more photographs from this encounter), the ochraceous  throat may not be readily visible under dim forest light and in thick undergrowth where this species love to forage, its habit of incessant hopping about is not helpful for birders and photographer to make a clear and unobstructed observation either.

Before I conclude, let me share an interesting image of a Short-tailed Babbler from sifu Sulaiman Salikan taken in Taman Negara, Sg Relau, Merapoh, Pahang on 5th October 2013. This bird is of the nominate race M. m. malaccensis, we can see that its throat is not as contrastingly white as we usually see, which indicates there are varying amount of ochraceous present at the throat of different individuals. 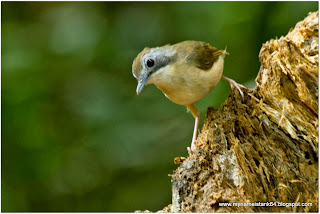