The female of all three are distinct and unmistakable, if a pair is seen together, their ID should be readily confirmed.

The males, on the other hand, are a different story, they look puzzling at first but there are subtle features to tell them apart as described below. 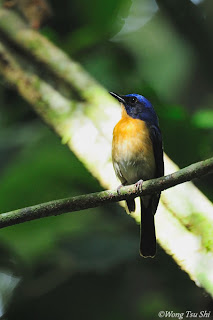 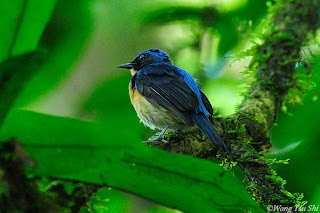 The identification features of male Bornean Blue Flycatcher are lack of dark chin and a bright shiny turquoise blue down its mantle and back as indicated in the above image.
﻿
This species is endemic to Borneo. 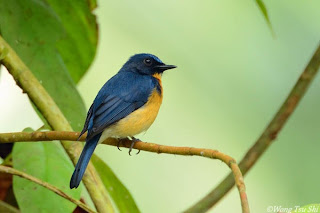 Though Tawau Hills Park is considered quite inland, and is lack of any mangrove trees, Mangrove Blue Flycatchers do occur here, see my earlier post here.

You can see that Mangrove Blue does have dark chin, contrary to the plate in Susan Myers, however, its mantle and back lacks the bright and shiny turquoise blue of the Bornean Blue. Its upperparts are also more uniformly colored. 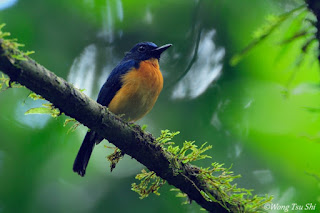 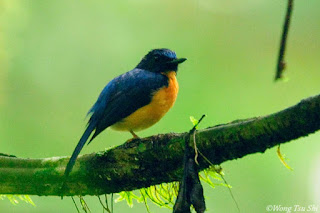 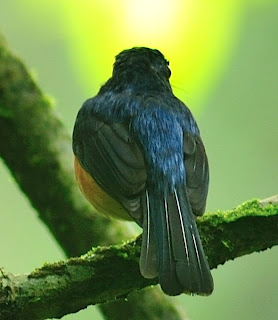 This image is courtesy of Kong Ket Leong

Large-billed Blue Flycatcher, on the other hand has relatively more saturated and extensive rufous orange underparts,  the legs look paler on birds that I have photographed.

It has more extensive dark chin than Mangrove Blue. Its back is dull blue in contrast to the darker mantle, whereas Mangrove Blue has the back uniformly colored with the mantle.

Large-billed Blue Flycatcher is only found on Borneo and Sumatra.

In Summary, the key to separate them is as follows:

2A, back and mantle uniformly colored = Mangrove Blue Flycatcher.

2B, mantle dark and back dull blue = Large-billed Blue Flycatcher.

It is not that hard, is it?

Nice write-up Wong. Interesting to see that the vent on your Mangrove Blue seems white. That's how most field guides show it, but not how I've seen it in the field (usually pale orange). How about the vent on Large Blue? Lastly, I do hope you can follow this up with a post on the females!

Thanks for comment, Dave. The vent of the Mangrove Blue FC is not exactly white, it has a tinge of rufous to it.

I do not have a clean shot that shows clearly the vent of the Large-billed Blue FC, but from the side way view of images that I have, it is similar to the Mangrove Blue FC.

As for the females, yes, I will do that after I got photographs of them all :D.

I do see 'Malayan blue flycatcher here behind the lodge too! With the dark throat male.

Hi Ahli Chung, thanks for your input, will sure do that if I can get pictures of the Malaysian Blue, I have heard about them but yet too see them there.