Had some personal matters to take care in Kota Kinabalu in middle of June, went a day early, asked help from Eugene Chia to show me around Manukan Island, hoping to get photos of the two famous resident birds.

We landed on the island after 11.00 am and immediately started to look for them. The Philippine Megapode/Tabon Scrubfowl Megapodius cumingii, a bird of islands and coasts, which had been very cooperative to photographers from Kota Kinabalu proved illusive. A pair was seen moving across the undergrowth, but did not stop to give me a chance to take photograph.

The other resident bird is the Mangrove Blue Flycatcher Cyornis rufigastra, its song could be heard at short intervals on the island, but this male only came to stop on top of me for a short while, just sufficient for me to take this photogrpah of the belly. 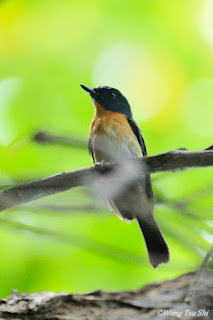 The rest of the day was uneventful and we left at 3.00 pm to continue our birding at Penampang paddy fields.

I have been trying to get photos of the Buff-banded Rail Callirallus philippensis, for a number of years now. This bird was first photographed in 2007 in Tempasuk plain in Kota Belud, it has since been recorded in Penampang and spread as far south as Kg. Chupak, Kuching, Sarawak.

I had been to Penampang paddy fields (which is more than 300 kilometers away from Tawau) at least seven times since 2008 without success to get a photo of this bird. This time I was lucky, Eugene spotted one feeding quite far away, and we quickly set up our gears to get some record shots. We spotted two chicks on the bund behind the adult, we were not sure whether they were their chicks until they joined the adult in foraging.

The bird is confirmed to be resident in Borneo after they have been photographed all year round here, however, I think this is the first time that the chicks are photographed, thus elevating its status to resident breeder. 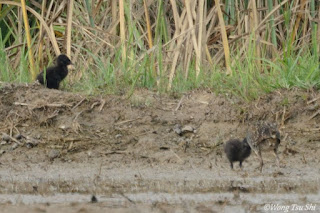 The adult is seen feeding the chick. 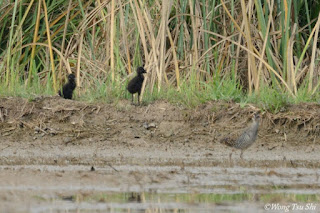 Two chicks on the bund while the adult is foraging.

This is the adult, which I have been trying to get for a while. 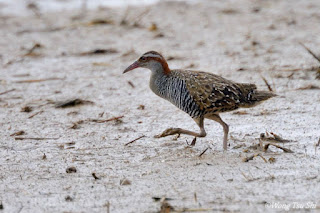 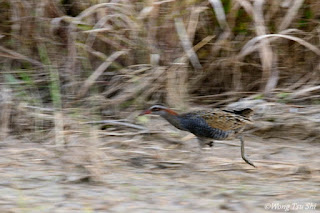 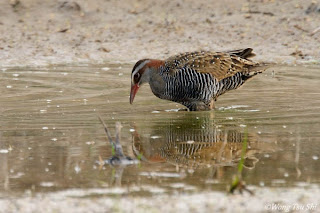 Thanks to Eugene and Tomoko for the fruitful trip﻿ which I managed to photogrpah two lifers.

It certainly was a fruitful trip. Congrats on your double lifer.