Some of my recent lifers

Thousand apologies for not updating my blog as regularly as I wish, as I am occupied with some other interesting project.

Birding is like playing golf, the better you are a golfer, the less number of strokes you get to play, with birding, it is the more birds you have in your list, the less lifer you going to record.

Banded Kingfisher Lacedo pulchella, my nemesis bird, finally got the female after so many attempts, they are often heard but seldom spotted. The male bird still remain elusive. 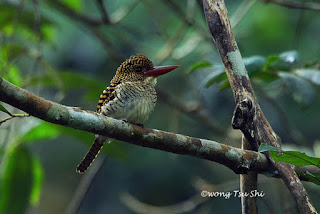 Banded Kingfisher Lacedo pulchella
Grey-headed Babbler Stachyris poliocephala, supposed to be common, but seldom seen due to its skulking behavior. 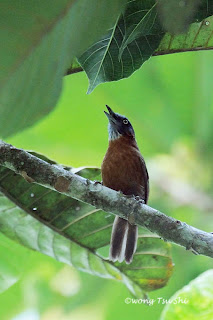 Grey-headed Babbler Stachyris poliocephala
Chestnut-naped Forktail Enicurus ruficapillus, another bird that is very very skittish, often seen feeding on wet surfaces but will fly off once it heard the approaching car, even if the car was hundreds of meter away. 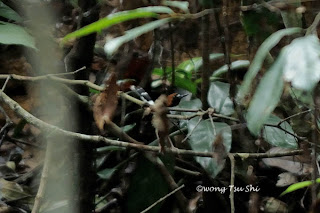 Chestnut-naped Forktail Enicurus ruficapillus
Great Argus Argusianus argus easy to hear in the jungle with its loud calls, but to see one is another matter altogether. One early morning, we were lucky to spot three of them about 300 meters away on the road side, we stopped our car and managed to get a few record shots with my camera's ISO set to the bearly acceptable maximum, i.e. 1600 with lens aperture fully opened. 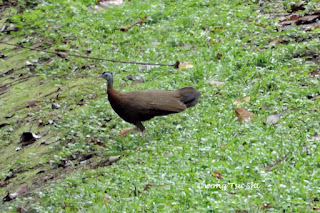 You are right - birding is like any other sports. The more you practice out there the better your skills would be. In golf i guess it will be your swings and putts.

In birding i guess it will be in identifying the birds as well as understanding their behaviors, habitats etc.