After the surprise discovery of the hitherto unknown  Spectacled Flowerpecker in Borneo last year, are we on our way for another bird new to science, which coincidentally also has spectacle? Please read on.
I have on two previous occasions photographed this bird. From the body shape and color it  cannot be anything else but a green barbet. 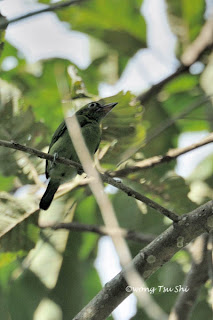 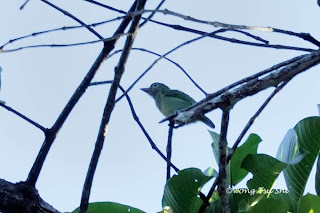 Taken on 21st August 2010
On checking through all available fieldguides on Borneo, there is not to be found such a barbet with prominent eye-ring, neither is there a bird described as this one in my other bird books.
I photographed it in Tawau, and my good friend Mr. Kong Ket Leong photographed one exactly like this in Sugud, Penampang, at the end of August 2010, which means it occurs on both side of North Borneo. So we can safely conclude that it is  1. a lowland bird and 2. widespread and not a freak.
Since it does not resemble any of our lowland green barbets in adult plumage, I assume it is an immature or juvenile bird. Our lowland barbets are Golden-whiskered, Red-throated, Red-crowned, Yellow-crowned and Blue-eared.
We can eleminate Golden-whiskered Barbet Megalaima chrysopogon as the fledglings of this species closely resemble the adult only slightly duller, so its golden yellow face would be evident.
The juvenile of Red-throated Barbet Megalaima mystacophanos is dull green and grey, bill yellowish-grey as per S. Myers.
The juvenile Red-crowned Barbet Megalaima rafflesii is also duller with indistinct head markings per S. Myers.
The juvenile of Yellow-crowned Barbet Megalaima henricii is again duller with indistinct head markings per S. Myers.
The juvenile Blue-eared Barbet Megalaima auatralis is duller with paler bill as per Myers.
To summarize, all juvenile barbets except Red-throated and Blue-eared should look more or less like the adults, sporting their colorful head patterns, only duller and less distinct. No mention on the head patterns of the juvenile of Red-throated and Blue-eared by Myers, though. 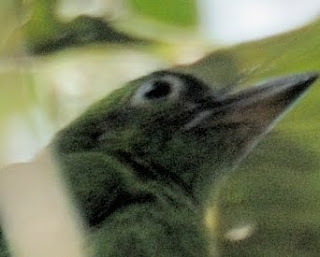 From the two blown up shots, we do not see any clear head colorings.
The only lowland barbet that does not have bold colorful markings on the head  is the female Red-throated Barbet, and it also has blackish bare eye-ring which might be paler in young bird,  but I do not think this is one because Red-throated has much longer and larger bill than this bird.
The only lowland barbet that has shortish bill like this one is the Blue-eared Barbet, but juvenile bird of this species in Oriental Bird Images does not show any eye-ring. see here.
Despite its eye-ring, my conclusion on this bird is that it is an immature Blue-eared Barbet and not something exotic, because  of its bill shape,  and its overall plain green head which resemble the bird in Oriental Bird Images as referred to in the above paragraph.
Happy birding and your thoughts and opinion are welcomed.
Photodocument of Wild Birds of Borneo
Standard References for my blog

Thanks Khaleb, no Lineated in Borneo.

Interesting indeed! Do keep us informed once its ID is confirmed! Thanks foe sharing! :)