Rainbow Bee-eater (Merops ornatus), a bird of Australian origin was first recorded in the island of Pulau Maratua off East Kalimantan in August 2010, by Mr Quenttin Phillipps et al.

Since that date, no update of the species was noted until a photogrpah purportedly taken in RDC, Sepilok Sandakan sometime in April 2016 came up in Social Media, sadly, details requested from the photographer for assessment of this historic record was not forthcoming.

However, the first fully documented photographic record of this species was taken by Mr. Stanley T Shao on the morning of 30th May 2016 at Silam Coast Conservation Area, a secluded and pristine coastal conservation run by Yayasan Sabah situated in Darvel Bay near Lahad Datu with an area of approximately 2,770 ha.

While Stanley was happily pressing his camera shutter that very morning, I was with another birder photographer Mr C P Ng  on our way to the Tallest Tree in Tawau Hills Park. When the image of this bird came through my WhatsApp message, I initially thought it was a hoax, but when Stanley posted  images of the location I knew he struck gold for I knew those places as I was there before.

Mr. C P Ng and I were debating whether to go find the Bee-eater when we were still walking to the Tallest Tree, as Silam Coast is less than two hours drive away from Tawau. We finally decided to go and started moving away  from the Tallest Tree after resting for less than a minute.

We arrived at Silam Coast Conservation Area at around 1.00 pm and spotted a few of them foraging overhead before we alighted from our car. There were altogether eight birders and photographers, apart from Mr Stanley T Shao, who were at the right place on the right day, this group was the lucky few who got the first photographs of these historic visitors, being first photographic record for the island of Borneo and first for Malaysia.

Some of the images taken by me are as follows: 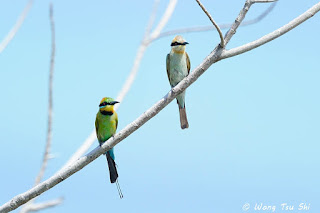 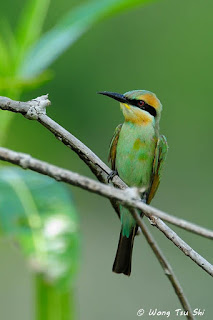 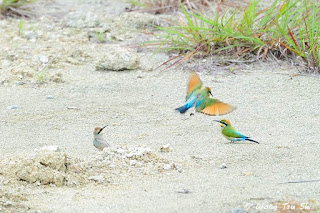 Many birders/photographers went to look for them after that day but failed to see them, and  thought  they must have moved on.

It was not until 10th July 2016, almost one and a half months later, when Mr. Stanley T Shao was driving on his way back from Kota Kinabalu to Tawau made a detour there and spotted them again. Since that day, all birders and photographers who took the trouble to visit the place were rewarded with images and sightings of them. They were still around as at 16th August 2016.